A Tribute to
All Canada's Veterans

This page is dedicated to all Canadian Veterans from all Wars

It is also specially dedicated to the lasting memory of my departed veteran brothers Rowland, Francis, Donald, Alan, Patrick and Earl (Mac).
... and to say thanks to my other sibling Alma who also served her country.
They all served their country well and their contribution will never be forgotten.
Spend a few minutes here and please remember all our veterans...always!
(Alex - Veteran and site Webmaster)

Highway of Heroes by Bob McQuaid

The Canadians on Juno Beach

A writer first made the connection between the poppy and battlefield deaths during the Napoleonic wars of the early 19th century, remarking that fields that were barren before battle exploded with the blood-red flowers after the fighting ended.
During the tremendous bombardments of the First World War the chalk soils became rich in lime from rubble, allowing 'popaver rhoeas' to thrive. When the war ended the lime was quickly absorbed, and the poppy began to disappear again.
The flowers sowed the seed for John McCrae's moving tribute to his fallen comrades. The irony must surely have struck the Canadian army doctor that on the same soil that battles were fought to the death, poppies thrived. Perhaps it brought a knowing smile to Dr. McCrae's lips that it was the satirical magazine Punch which first published his poem in 1915.
After John McCrae's poem In Flanders Fields was published the poppy became a popular symbol for soldiers who died in battle.
Three years later an American, Moina Michael, was working in a New York City YMCA canteen when she started wearing a poppy on her lapel in memory of the millions who died on the battlefield. From this simple, private gesture blossomed a tradition that is followed today by millions of people around the world, symbolizing respect and grateful remembrance for the millions who died in that war, and subsequent conflicts.
During a 1920 visit to the United States a French woman, Madame Guerin, learned of the custom. On her return to France she decided to use handmade poppies to raise money for the destitute children in war-torn areas of the country. In November, 1921, the first poppies were distributed in Canada.
And, it is "In Flanders Fields", Dr. McCrae's immortal lamentation to the war dead, that the poppy has found fame, and for children, the poem and the poppy remain the most visible connection to war.
Thanks to the millions of Canadians who wear poppies each November, the little red plant has never died. And neither have Canadian's memories for their countrymen who gave their lives in battle. 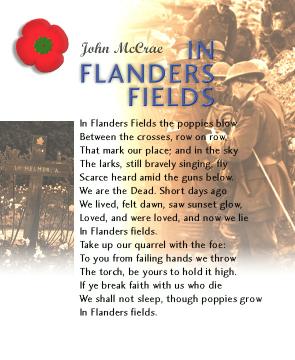 A poem - to Colonel McCrae's immortal poem,
In Flanders Fields

We have kept faith, ye Flanders dead;
sleep well beneath those poppies red
that mark your place.
The torch your dying hands did throw,
we've held it high before the foe
and answered bitter blow for blow
in Flanders Fields.

And where your heroes blood was spilled
the guns are now forever stilled
and silent grown;
there is no moaning of the slain;
theirs is no cry of tortured pain
and blood will never flow again
in Flanders Fields.

Forever holy in our sight
shall be those crosses gleaming white
that guard your sleep.
Rest you in peace, the task is done;
the fight you left us we have won
and peace on Earth has just begun
in Flanders now. 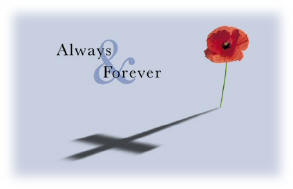 "Lest we forget / N'oublions jamais."

On October 21, 2004 the Royal Canadian Mint, together with The Royal Canadian Legion, unveiled the world's first coloured circulation coin. The 25-cent coin features a red poppy, the symbol that pays homage to the 117,000 brave Canadians that have died while in the service of the nation. Two additional Poppy Coins have been issued since 2004.

The Canadian Government declared 2005 as
"The Year of the Veteran" 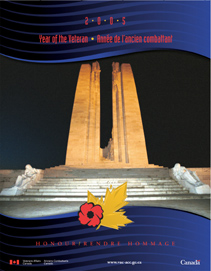 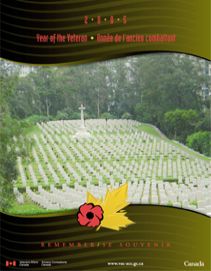 The Year of the Canadian Veteran
The Royal Canadian Mint issued the Year of the Veteran 25-Cent coin on October 17, 2005. In 2005, Canadians are reaching out to thank our veterans and honour their decades of duty and sacrifice. These brave men and women are not only those who fought in World Wars I and II and the Korean War. Amongst them are the younger faces of Canadian Armed Forces personnel who have served in places like Afghanistan and the former Yugoslavia, fostering peace and freedom on behalf of Canada.
The design depicts the profiles of two veterans from different generations, joined by their love of country.

A unique tribute to Canada's veterans

A granite memorial commemorating Canada's military veterans is located in Queen's Park, Toronto, ON. The Veterans Memorial, a 30-metre long wall, etched with scenes of Canada's military history, is the work of artist Allan Harding MacKay.

The 40 scenes etched into the granite are based on existing paintings, vintage photographs and World War I film. They picture the Fenian Raids of 1866 up to current missions, such as the one in Afghanistan.

The memorial is in a grassy setting with trees, a paved "gathering area," and a seating area. This installation is intended to be a place for contemplation as well as remembrance.

The unveiling ceremony was followed by one of the largest military parades in Toronto since the Second World War, and included thousands of men and women of the Canadian Forces, cadets, veterans, bands and mounted units.

The 2005 Victory in Europe Anniversary Nickel honours the 60th anniversary of the end of WWII. This special circulation coin is a representation of the 5-cent coin created in 1943 to promote the Canadian war effort.

This 2005 domestic rate (50˘) stamp honours the Canadian War Museum's new home, built in Ottawa as a memorial to the men and women who served in Canada's armed forces. Displayed in Morse code is the phrase "Lest we forget / N'oublions jamais." The central image of the stamp is the Memorial Cross GRV, best known as the Silver Cross, awarded to wives and mothers of fallen servicemen.

For the complete story of the Canadians on D-Day June 6th, 1944

This page is part of Knight's Canadian Info Collection

Please visit our other pages