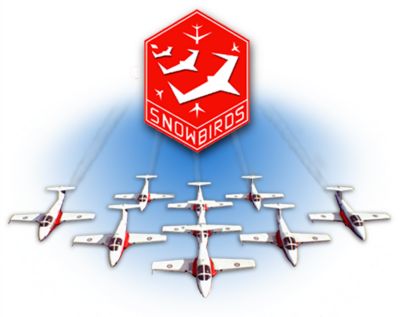 The Snowbirds are the most famous military demonstration team ever formed in Canada. The Canadian military has a strong history involving other teams prior to the Snowbirds. In 1929, the first ever Canadian demonstration team, the Siskins was formed by the RCAF. The Golden Hawks followed in 1959, and in 1967, the Golden Centennaires were formed to commemorate Canada's centennial year. The Golden Centennaires flew only that one year. Not until four years later were the Snowbirds formed. The following is the history of each of these teams.

Formed in 1929, the Siskins flew for three seasons. The team consisted of three Armstrong-Whitworth Siskin IIIA biplanes and were based at Camp Borden, Ontario. Occasionally, the team would tie the aircraft together with rope while in the air! During their three year existence the Siskins flew over 100 aerial demonstrations.
The Siskin was one of Canada's top line fighters until just prior to World War Two. It had a 450 horsepower engine, a maximum take-off weight of just over 3,000 pounds, a top speed of 256 miles per hour, and a service ceiling of 27,000 feet. It was armed with two Vickers .303 machine guns. One of the Siskin pilots, Squadron Leader E.A. McNabb, would become the first RCAF pilot to win the Distinguised Flying Cross during World War Two.

The Golden Hawks were formed in 1959 to celebrate the Golden Anniversary of flight in Canada, as well as the RCAF's 35th anniversary. The team flew six F-86 Sabres with most of the formation flying involving four aircraft with two soloists. The show was 25 minutes long and consisted of standard RCAF maneuvers, but with much closer formations. The Golden Hawks remained active until February 7, 1964 before being disbanded. The team flew 317 demonstrations over their five year existence.

The Golden Centennaires were formed in 1967 to celebrate Canada's centennial. The Canadian Armed Forces team, flying eight CT-114 Tutor used today by the Snowbirds, performed 100 shows in Canada during the year as well as eight others in the United States. Over four million people watched their performances during the season.
The team was commanded by Colonel O.B. Philp, who would later form the Snowbirds. In 1969, Colonel Philp noticed several white painted Tutors at the base in Moose Jaw, Saskatchewan . It turned out they were former Golden Centennaires aircraft and still modified for aerobatic flying. By 1971 he had formed an unofficial "non-aerobatic" team which practiced after their regular flying hours. This group would eventually become the Snowbirds.

The team held a competition in 1970 at the Base Elementary School to name the new demonstration team. The name "Snowbirds" was the eventual winner. The Snowbirds, using seven aircraft, flew their first official demonstration on July 11, 1971 at the 1971 Saskatchewan Homecoming Airshow. They also flew at major airshows across Canada, including Abbotsford and the CNE in Toronto, as well as at military bases.
In 1972 two solo aircraft were added to the team. They flew 25 shows that year. In 1973 the Snowbirds expanded their show to include aerobatic formation maneuvers, but formation changes during these maneuvers was still disallowed. The team was cleared to fly a fully aerobatic formation display in 1974. They also adopted the paint scheme that is still used today that same year. The Snowbirds flew 80 shows in 1974.
The Snowbirds performed an unusual show in 1975 on May 11 at Inuvik when they flew their performance at midnight.
In 1977 the team was made a permanent unit and was designated the Canadian Forces Air Demonstration Team (CFADT). On April 1, 1978 the Snowbirds were given squadron status and were designated 431 Air Demonstration Squadron.
They flew their 1000th demonstration in 1990.
1993 marked the first performance outside of Canada and the U.S. when the team flew three shows at Guadalajara, Mexico. Also in 1993, team lead Major Dean Rainkie flew a rare formation with an Su-27 of the Russian Knights at the Abbotsford Airshow.
Another rare flypast involving a Snowbird was at Abbotsford in 1995 when team lead Major Steve Hill lead a formation with aircraft from the Brazilian Esquadrilha da Fumaca, the Chilean Halcones, and the Northern Lights.

In 2020 they celebrated the 50th Anniversary as a demonstration team.

The Canadian Forces 431 Air Demonstration Squadron, is the product of a proud history of military aerobatic demonstration teams. The Canadian team, the Siskins, flew air displays between 1929 and 1932 with five Siskin IIA biplanes. From 1959 to 1963 their successors, the Golden Hawks, few seven gold painted F-86 Sabre jets across the skies of North America. Another team the Golden Centennaires, flying eight Canadian built CT-114 Tutor aircraft along with a spectacular duet involving the supersonic CF-104 Starfighter and CF-101 Voodoo, the RCAF's famed Red Knight and two Avro 504K biplanes, helped to celebrate Canada's 1967 Centennial.

The Snowbirds, were formed at CFB Moose Jaw, Saskatchewan where they still call home today. The team consists of 12 CT-114 Tutor aircraft, including two solo aircraft Nos. 8 and 9, which are the opposing solos.

The Montreal firm of Canadair designed and constructed the Tutor. Its original designation as the CL41-A was changed to the CT-114 Tutor when purchased by the Canadian Armed Forces. Canadair's design team, headed by project engineer Fred Phillips, began working in 1955 to build an aircraft capable of replacing the Harvard and the deHavilland Chipmunk as a military trainer.
Test pilot Ian MacTavish first flew the Tutor on January 13, 1961. By September of that year the plane had been ordered into full production for the Canadian Armed Forces. Between 1964 and March 1967, 190 Tutor jets had been delivered to the Canadian military.

There are 13 CT-114 Tutors assigned to the Snowbirds. They are consecutively numbered from one through thirteen. Eleven aircraft travel to each show site, with two being held in reserve in Moose Jaw.
There are some differences between the Tutors flown by the Snowbirds, and the standard military version of the same aircraft. These include:
- unique paint scheme
- cross-cockpit modifications; in the Snowbird planes, the pilot is able to fly solo from either seat
- engine is highly tuned to maximize low level response
- nicad battery system to facilitate simultaneous internal ground starts
- transistorized rather than tube radio to enable communication between planes before engine start
- coloured smoke generating system; 2 tanks under fuselage hold 35 gallons of diesel fuel that is sprayed into the jet exhaust and ignited.

Due to the phase out of the Tutor (CT-114 / CL41) as a training aircraft, 431 Squadron's manning levels have changed following the completion of the 2000 season. The squadron now boasts a total strength of approximately 80 military and civilian personnel. The new squadron personnel are members of the aircraft maintenance organization.

The Canadian Forces Snowbirds are the only jet aerobatic team in the world that does not rely on a support aircraft. The Snowbirds are a fully self-contained unit of 85 personnel. The team uses the Tutors to transport all personnel and equipment. A tremendous undertaking. The additional aircraft are used as backups in case of problems with the primary aircraft. In all the years that the Snowbirds have been flying the team has never had to cancel a show due to mechanical problems, a testament to the people that support and maintain the aircraft.

431 (AD) Squadron, as it now exists, is the result of the concerted effort of all the people involved with the Snowbirds over the last thirty years. Their mission remains the same namely to demonstrate to the North American public the skill, professionalism and teamwork of the Canadian Forces. As the Snowbirds strive for perfection in formation aerobatic flight, they draw upon the spirit and example of those who have served before them.

The Canadian Snowbird Demonstration Team is one of the finest teams in the world and serves as ambassadors for Canada and it's military. 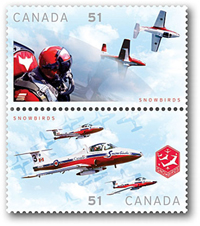 The Snowbirds and all Canadians salute the following deceased team members:

Seven pilots and one passenger have died in crashes of Snowbird jets since the team was formally inaugurated in 1971.
They Are:-

Capt. Jenniver Casey - was the Public Informatio Officer for the Team. Killed after ejecting during transfer flight in Kamloops, BC May17, 2020

Capt. Wes Mackay - #8, Lead Solo - Killed in a motor vehicle accident after a performance in Latrobe, Pennsylvania in 1988. Age 28.