THERE ARE MANY MORE CANADA PAGES on this site
Click on the various links in the left-frame.

In the summer of 1999 Canada added another 80,000 sq.km. to the National Park system when it established 3 new parks in Nunavut Territory. These parks are described as "northern gems" and are named Surmilik, Auyuittuq and Quttinirtaaq. The Inuktitut names chosen for the parks illustrate the frozen terrain's major features: "place of glaciers," "land that never melts" and "top of the world"."

There are 21 wildlife refuges and wild bird sanctuaries in all parts of Canada.

The smallest park is the St. Lawrence Island Park, ON at 40 hectares.

Clayquot Sound, in the Pacific Rim National Park, BC has been declared a United Nations Biosphere Reserve by UNESCO.

At 5,959 metres (19,550 ft), Mount Logan is Canada's tallest peak. Mt. Logan is the highest point in Canada and second in North America only to Mount McKinley. Located in the St. Elias Mountains of southwestern Yukon Territory, the peak towers about 4,300 m (14,000 ft) above the Seward Glacier at the Alaska border to the south and is a focal point of Kluane National Park, a 22,000-sq-km (8,500-sq-mi) rugged wilderness. The actual ridge crest of the mountain is about 16 km (10 mi) across, while the entire mass is more than 32 km (20 mi) long.

The longest river is the Mackenzie River flowing 4,241 km. through the Northwest Territories.

There are 20 heritage rivers in Canada.

The deepest lake in Canada is Great Slave Lake, NW which has a depth of 614 metres.

Great Bear Lake is the largest fresh water lake entirely within Canada, with an area of 31,326 sq.km.

Four of the five Great Lakes straddle the U.S.-Canada border; the fifth, Lake Michigan, is entirely within the United States

The highest lake in Canada is Chico Lake, BC at 1,171 metres.

Della Falls is the highest waterfall in Canada and tenth highest in the world. It is situated close to the southern boundary of Strathcona Provincial park on Vancouver Island. Water flows from Della Lake into Della falls and it has a 440 m. (1,440 ft.) drop on Drink Water Creek to Great Central Lake.

The Greatest waterfall by volume is Niagara Falls, ON - the Canadian Horseshoe Falls dumps 5,365 sq. metres per second into the Niagara river.

TIME ZONES
Canada encompasses six time zones. In Newfoundland the time zone is 3 hours + 30 minutes behind Greenwich Mean Time (GMT). The other time zones are in even-hours behind GMT, from East to West. The Pacific region is 8 hours behind GMT.
Note: In Canada, Time Zones and Daylight Saving Time are usually regulated by provincial and territorial governments. 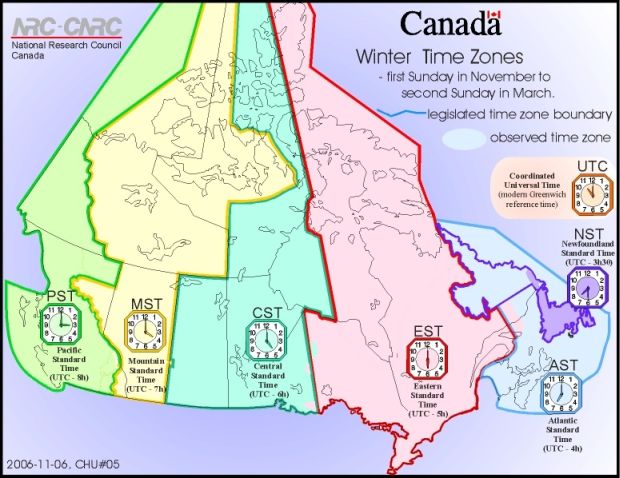 THE CANADIAN ARMED FORCES
There are about 67,000 active and 26,000 Canadian Forces reservists in Canada.
The Canadian Armed Forces comprise Land Forces Command (ARMY), Maritime Command East and West(NAVY), Air Command (AIRFORCE) in addition to Communications Command and Training Command. They were integrated in 1967 (although each branch again has its own distinctive uniform and badges) and is a voluntary service.
Canadian Forces members have served with distinction in World Wars I and II, the Korean War, Viet Nam, the Gulf War, Somalia, Yugoslavia and several others.
Members of the Canadian army's anti-terrorist unit (JTF-2) and several thousand fighting troops and support units are assisting the world effort in the war on terrorism in Afghanistan. 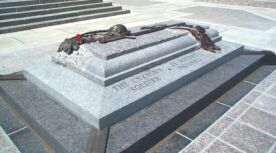 Canada now has its own "Tomb of The Unknown Soldier," after the remains of a soldier killed in the battle of Vimy Ridge in France during the First World War were returned to Canada. The soldier was one of 27,000 Canadian soldiers killed in conflicts abroad whose remains could not be identified or were lost at sea. His remains were interred on May 28, 2000 at the National War Memorial in Ottawa, after a three-day vigil on Parliament Hill. The Royal Canadian Legion began the endeavour to bring the soldier home as a millennium project. They wanted to create a Canadian "Tomb of The Unknown Soldier" to pay tribute to those military and merchant navy members whose remains have not been recovered, or whose graves are marked with the words "Here lies a Canadian Soldier Known Only Unto God". Canada has pledged never to identify the remains using modern technologies such as DNA testing.

CANADA'S NATIONAL MILITARY CEMETERY
Canada's first National Military Cemetery of the Canadian Forces was dedicated in June 2001, by Governor General Adrienne Clarkson. Ottawa's Beechwood Cemetery, established in 1873, is already the resting place for numerous Canadian war heroes and dates back to the Northwest Rebellion (which took place in what is now Saskatchewan). The sprawling, rolling area set aside for Canada's military personnel, can still accommodate as many as 6,000 graves. The largest military cemetery is in Point Claire, QC, where 18,000 war veterans are buried. Other sites in Vancouver, BC and Winnipeg, MB also contain large numbers of war veterans. The Point Claire site, which is operated by the Last Post Fund, has recently been opened for Canadian Forces veterans, but only those who have served in special duty areas such (as Cyprus and Bosnia) can be buried there.
The National Military Cemetery will serve as a national focal point to demonstrate Canada's commitment to peace and security both internationally and at home. The Cemetery will honour the sacrifices made by all current and former Canadian Forces (Regular and Reserve) members who have been honourably discharged and any Peacekeepers and Canadian Veterans of the two World Wars and Korea (including Merchant Seaman). In addition, an immediate family member may also be interred in the same plot as the service members.

CANADA PEACEKEEPERS
Canada is well known for its peacekeeping role with the United Nations and NATO in many areas throughout the world. These include: the Golan Heights, Cyprus, Crotia, Haiti, Cambodia, Bosnia, Kosovo, East Timor, Afghanistan and several others. Armed forces members have served and are serving in every U.N. controlled location since 1956.

Canada has sent astronauts into space as part of the U.S. space program on several Space Shuttle flights. Canada has its own astronaut training program (The Canadian Space Agency) and also trains with NASA.

To learn more about Canada's Astronauts, The Space Agency and what Canada is doing in space, click on the links in the left-frame or use the Site Map link at the end of this page.

THE CANADIAN SECURITY AND INTELLEGENCE SERVICE

CSIS is a government agency that has a federal mandate to collect, analyze and retain information or intelligence on activities that may, on reasonable grounds, be suspected of constituting threats to the security of Canada and in relation thereto, report to and advise the Government of Canada. CSIS also provides security screening and assessments, on request, to all Federal Departments and Agencies (including Immigration and Citizenship), with the exception of the RCMP and the Department of National Defence. These threats to the security of Canada include: Espionage, Sabotage, Foreign Influences or Activities, Political Violence and Terrorism or Subversion.

HEALTH AND WELFARE
Canada has one of the world's highest living standards.

All Canadian have free access to a national health care system. Most people over 65 recieve their medical costs, hospital stays and all associated expenses at no cost.

CANADA'S PARLIAMENTARY POET LAUREATE
Canada's fourth and the current Poet Laureate is Pierre DesRuisseaux. He was appointed in 2009. George Bowering was named Canada's first Poet Laureate (2002-2004) and Pauline Michel was the second (2004-2006). In November 2006 Canada's third Parliamentary Poet Laureate was named for the period 2006-2008. He is John Steffler of Montreal.

The largest populated city in Canada is Toronto (ON) followed by Montreal (QC), Vancouver (BC), Ottawa-Gatineau (ON-QC), Calgary (AB) and Edmonton (AB).

76.6 per cent of Canadians live in cities and towns while 23.4 per cent live in rural/farm areas.

Over 31 per cent of the population live in the largest cities of Toronto, Montreal and Vancouver.

The life expectancy of a Canadian woman is 84 years and a Canadian man is 76 years.

The size of the average family is 3.1 people (including 1.3 children).

THE ABORIGINAL POPULATION
There are over 550,000 status or non-status Aboriginal People and another one million or more who claim to be of First Nations descent. Of these million, 790,000 are Natives, 220,000 are Metis and 50,000 are Inuit.

Over 300,000 Aboriginals live on reserves throughout Canada.

The only true indigenous culture in Canada is that of the Aboriginal Peoples since all other Canadians were originally immigrants.

So we know you have visited the KCIC Web site, please
leave a comment in our GUESTBOOK
Use the Guestbook link to the left

This page is part of Knight's Canadian Info Collection
Please visit our other pages Site © by K.C.I.C. - A. Knight (Webmaster)