A BRIEF HISTORY OF THE BEAVER
(as a symbol of Canada) 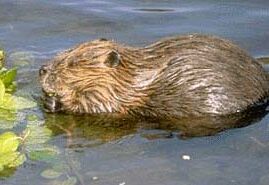 The quest for religious and political freedom is often cited as the reasons Europeans colonized North America, but natural resources were another major draw. These included whales, vast schools of cod, and towering lodgepole pines used for ship's masts. But the resource that lured explorers across the continent was ACTUALLY the beaver.

After the early European explorers realized that Canada was not the spice-rich Orient, the main mercantile attraction was the beaver, then a population numbering in the millions. In the late 1600s and early 1700s, the fashion of the day demanded fur top-hats, which needed beaver pelts. As these hats became more popular, the demand for the pelts grew. Explorers were dispatched deep into the North American wilderness to trap and trade for furs with local natives.

King Henry IV of France saw the fur trade as an opportunity to acquire much-needed revenue and to establish his North American empire. Both English and French fur traders were soon selling beaver pelts in Europe at 20 times their original purchase price.

The first North American coat of arms to depict a beaver was created by Sir William Alexander, who was granted title in 1621 to the area now known as Nova Scotia .

The trade in beaver pelts proved so lucrative that the Hudson's Bay Company honoured the buck-toothed little animal by putting it on the shield of its coat of arms in 1678. The Hudson's Bay Company shield consists of two moose and four beavers separated by a red St. George's Cross, and reflects the importance of this industrious rodent to the company. A coin was created at that time to equal the value of one beaver pelt.
There is a magazine called "The Beaver", first published in 1920 by Hudson Bay Company, that is still being published today.

Hudson’s Bay Company was no ordinary business. Wielding extraordinary power, it was a business that acted like a nation. It played a major role in the exploration of Canada, even helping determine its borders. A potent rival to Hudson’s Bay Company, the French also honored the beaver in 1678. In that year, Louis de Buade de Frontenac, then Governor of New France, suggested the beaver as a suitable emblem for the Colony, and proposed it be included in the armorial bearings of Quebec City. In 1690, the "Kebeca Liberata Medal" was struck to commemorate France’s successful defense of Quebec. The reverse depicts a seated woman, representing France, with a beaver at her feet, representing Canada.

The beaver was included in the armorial bearings of the City of Montréal when it was incorporated as a city in 1833. Sir Sandford Fleming assured the beaver a position as a true National Symbol when he featured it on the first Canadian postage stamp - the "Three Penny Beaver" of 1851.

The beaver appeared with the other popular Canadian symbol, the maple leaf, on the masthead of Le Canadién, a newspaper published in Lower Canada. It was one of the emblems of the Société Saint-Jean-Baptiste for a time, and it’s still found on the crest of the Canadian Pacific Railway Company (CPR).

Despite all this recognition, the beaver was close to extinction by the mid-19th century. There were an estimated six million beavers in Canada before the start of the fur trade. During its peak, 100,000 pelts were being shipped to Europe each year, and the Canadian beaver was in danger of being wiped out. Luckily, about the mid-19th century, Europeans took a liking to silk top-hats, and the demand for beaver pelts all but disappeared. Beaver populations began to recover as Great Britain’s northern North American territories evolved towards nationhood.

On March 24, 1975, the beaver received the highest honour ever bestowed on a rodent. On that day it became an official emblem of Canada when an "act to provide for the recognition of the beaver (castor canadensis) as a symbol of the sovereignty of Canada" received Royal assent. Today, thanks to conservation and silk hats, the beaver - the largest rodent in Canada - is alive and well all over this great country.

The beaver design has appeared seven times on a Canadian stamp issue. It first appeared on the 1851 3 pence, followed by the 1852 3 pence stamp on wove paper, the 1858 3 pence issue, the 1859 five cent, the 1951 15 cent, the 1982 stamp-on-stamp for the Canada '82 Philatelic Exhibition, and a 25 cent stamp in 1988. As 2001 is the 150th anniversary of the first Canadian postage stamp, Canada Post has issued another beaver stamp to honour the occasion. The Royal Canadian Mint also issued a special commerative 3 cent coin in 2001 (shown below larger than actual size). It is not in general circulation and only available to collectors by special order.

The 1976 Summer Olympics in Montreal saw Amik the beaver as their mascot. The name Amik means beaver in the Algonquin language, the most widespread language among Canada's Native Americans.

An 18th Century silver Canadian trading token was in the shape of a beaver. It was valued at 10 beaver pelts.

One group of Canadians have celebrated National Beaver Day on the last Friday in February since 1974. They are the Nova Scotia Association of Architects, a club of modern builders any beaver could appreciate.

The de Havilland Beaver is a single engine high-wing five seat bush airplane. Depending on the season, it may be operated on floats, wheels, or wheel-skiis and is a favorite among fishermen, hunters and canoeists for safe, economic travel throughout the north.

Scouts Canada (Boy Scouts) includes the Beaver Program in their organization. It consists of a group of Beavers 5 to 7 years of age. Beavers meet in a group called a colony. The colony is split into smaller groups called lodges. There is one leader for every five Beavers. Each Beaver learns a promise, law and motto to help guide their personal development.

The Beaver Fire Insurance Company was incorporated in 1913 and operated in Canada for many years. It was eventually absorbed into a large insurance group, surrendered its Charter and went out of business.

A small, tasty, sugar-coated pastry is called a Beaver Tail (sometimes spelled Beavertail, in one word). It can be found mostly in the Ottawa area.

The Beaver is the state animal of the State of Oregon.

There was an old Canadian tool manufacturing company named BEAVER.

LINKS
The Canadian Wildlife Service has an excellent page all about the beaver. To view this page (and stay on the KCIC site)

SOME FACTS ABOUT THE BEAVER

The North American beaver (Castor canadensis), is a large, web-footed, semi-aquatic rodent with brown fur and a wide, flat, dark tail. The tail acts as a rudder while swimming, as a prop for standing upright, as a lever when dragging tree logs, and as a noise maker for producing a warning signal when it is slapped on the water. The fingers have long claws, and the legs have small webbed feet and claws. The beaver has a large, wide, head. It has sharp, renewable, self-sharpening, enameled teeth that can cut through wood and fell a tree.

HABITAT
Beavers live by rivers, streams, ponds, and lakes. They are one of the few animals that alter their environment in a large-scale way in order to provide themselves living space and protection. Beavers build dams that change the course of streams and create ponds. They build dams and lodges using sticks, bark (from deciduous trees), mud, and logs (that they fell themselves). The presence of pointed tree stumps is a good indication that there are beavers living nearby.

To create a habitat, beavers build a dam in a stream, flooding an area of the woods and creating a pond in which the beaver can build a lodge. This beaver lodge or den is located away from shore and has an underwater entrance. This makes it difficult for most predators to enter the lodge. In winter, the water around the lodge usually freezes, protecting the beaver almost completely. Some beavers live by rivers and do not need to build dams. Instead, they live in burrows that they build on the river bank.

Each beaver pond is inhabited by one beaver family: two adults and usually 2-4 kits (very young beavers) and the yearlings from the previous year's litter. When the food supply around the beaver's home is exhausted, they move to another site and start again.

REPRODUCTION
Beaver mating occurs in January or February. The kits are born in early spring, from April through June. When young beavers reach their second summer, they take on adult duties, building and maintaining the lodge and the dams. They reach adulthood during their second winter and move away to find a mate and build a lodge of their own.

FOOD
The beaver eats aquatic plants (including pond weeds, water-lilies, and cattails) and the cambium (the soft tissue in which new wood and bark grow) of hardwood trees, including birch, aspen, willow, cottonwood, and alder.

PREDATORS
Some of the animals that prey upon beavers include foxes, coyotes, wolves, lynx, otters, weasels, hawks, eagles and owls.